We have been reviewing past corporate group photography commissions and came across a group photograph we captured for the International Maritime Organisation. It stood out as due to the current tier 4 lockdown in London the corporate team photograph reminded us of how far we are now removed from being in close contact with large groups of people. 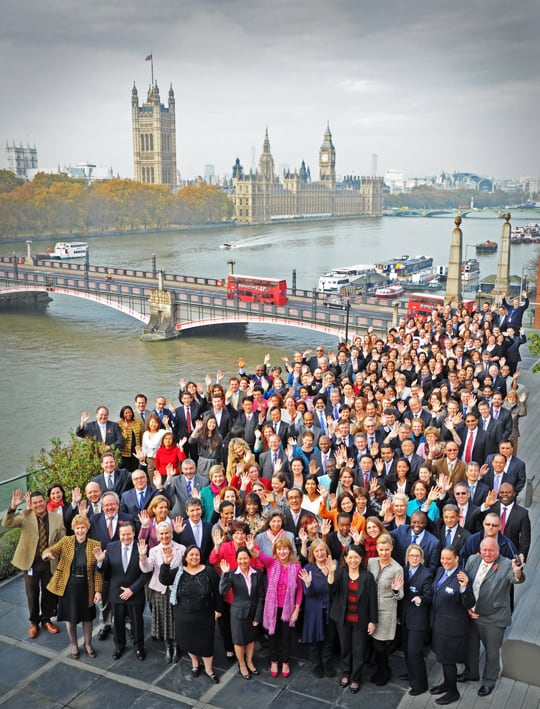 Group photograph commissioned by the IMO.

We really enjoyed this commission as the IMO planned to award a framed copy of the photograph to their retiring Chairman. They understood that we would need to recce their headquarters and to manage this, many people would be tricky in any situation. We divided the people into sections and marked out different areas on the ground. We then asked each section to stand in their areas. Experience has shown us that if people are not guided to where you need them to stand, then it is hard to communicate to a large group how and where you want them to be for the team photograph.

For this corporate group photography, we were on a raised platform with an aid who had a loudspeaker. On the ground were several helpers who could move people if we needed to balance the group. They had also asked if I could take the photo with a London red bus going over Lambeth Bridge. In the end, we photoshopped the bus in as the best shot was when we asked the group to wave and no bus was crossing at that point.

Looking at the group of people now and how we had packed them all into the space, we wonder how long will it be before we are allowed to do this type of photograph.  Even when it is permitted will people want to, as we think the memories of Covid 19 restrictions and fears will linger for many years.